Because who can resist floating continents in the sky as a synopsis? 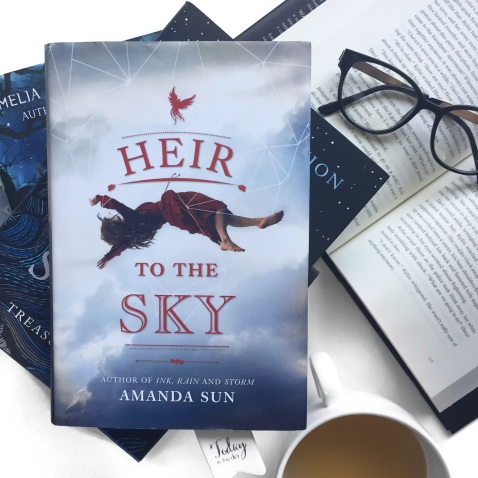 As heir to a kingdom of floating continents, Kali has spent her life bound by limits: by her duties as a member of the royal family, by a forced betrothal to the son of a nobleman, and by the edge of the only world she’s ever knowna small island hovering above a monster-ridden earth, long since uninhabited by humans. She is the Eternal Flame of Hope for what’s left of mankind, the wick and the wax burning in service for her people, and for their revered Phoenix, whose magic keeps them aloft. When Kali falls off the edge of her kingdom and miraculously survives, she is shocked to discover there are still humans on the earth. Determined to get home, Kali entrusts a rugged monster-hunter named Griffin to guide her across a world overrun by chimera, storm dragons, basilisks and other terrifying creatures. But the more time she spends on earth, the more dark truths she begins to uncover about her home in the sky, and the more resolute she is to start burning for herself.

Let’s just start with this, the cover is stunning. I fell in love with it after seeing it on Harlequin Teen’s Instagram. What can I say? I’m a sucker for good cover art. Then I read the synopsis on NetGalley. An heir to a kingdom of floating continents? Phoenix mythology? Monster hunters? Ummmm…yes please.

This book and I have had our ups and downs. I was originally so excited for it but I received it right at the beginning of a major reading slump. It spent a couple months being moved around my TBR pile and thrown into different travel bags all summer. I finally started it two nights ago and i’m sorry to say but the floating continents…not that interesting (with pretty cliche/vague political plot).

The good stuff came after the fall.

Monsters, Griffin -our rugged hero- and Kali’s determination to be a badass kept me reading. Despite her constant naivety (I mean…come on, who doesn’t realize that they’ve been the target of two assassination attempts?) I have to admire Kali’s refusal to be helpless in any situation she was placed in. Griffin’s story was probably the most interesting part of the book. Other than the obvious discovery that he was one of the fallen, his Benu familial history and life on earth after the fall was a thrilling addition to an otherwise flat, hobbit like, march to the top of a mountain.

And the insta-love. Ohhhhh the insta-love. I realize the plot on earth was meant to be over a month or so but it was a lot for me. Perhaps they follow apocalypse rules? You know, the whole – they’re the right gender for me and don’t appear to be attached so I call dibs because most of humanity is dead- approach? In a world full of chimeras, dragons and leviathans… I would probably hop on that train too.

The ending had its share of excitement though and left me feeling rather content. Overall, it’s a fun and easy read in a world full of some really gut wrenching YA fiction. The concept: flawless. But it could have been so much more than it was. Did I enjoy it? Yes. Would I read a sequel? Probably not.