My 1st OwlCrate has arrived! Dropped on my front porch like all good Owl Post should be.

Who doesn’t love a good dystopian novel!? From George Orwell to Suzanne Collins, dystopian societies have been holding readers interests for a very long time. Obviously I was pumped when I heard April’s OwlCrate was Dystopian themed so I took the dive and subscribed for my first box ever.

I was a little disappointed?

Maybe it’s because two of the items were Hunger Games? I’ve been collecting HG memorabilia for YEARS so I was hoping the box would introduce me to some new favourites. In saying that, the minimalist magnets from Half Blood Prints are amazing and i’ve been wanting some artwork from this store forever! And I still love Hunger Games so the Mockingjay bracelet by Geeky Cauldron (one of my fave stores btw, Fandom of the Month anyone?!) is equally adorable.

AND Evie Books! What can I say? I drool over her Instagram daily. So excited to finally have a piece from her store.

The thing I was most excited about was the book selection. I love being introduced to new books and a debut novel from Cecelia Ahern sounds like absolute perfection. Unfortunately, I think the marketing team could have stepped up their game for the book blurb…Cecelia Ahern did a better job describing her book in the special OwlCrate letter. Regardless, I’m excited to read it! I’ve loved the majority of her adult novels so I can’t wait to see what she brings to a YA Dystopian novel. Should I prepare for tears like usual?

Overall I was happy with my first OwlCrate experience, it just wasn’t as exciting as I thought it would be. I am SO SO SO excited for Steampunk next month though. I haven’t really delved into Steampunk in any facet but video games so I can’t wait to see all the new surprises waiting for me in that box!

A Study in Charlotte, the next generation of epic Holmes and Watson adventures with a side of well loved YA style romantic pining. 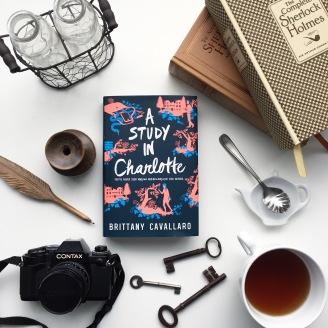 But when a student they both have a history with dies under suspicious circumstances, ripped straight from the most terrifying of the Sherlock Holmes stories, Jamie can no longer afford to keep his distance. Danger is mounting and nowhere is safe—and the only people they can trust are each other.

Favourite Quote: “I didn’t bother to ask how she knew. She was a Holmes”

As someone who has read a lot of Sherlock adaptations/fanfiction and has been absolutely spoiled by Benedict Cumberbatch and Martin Freeman’s portrayal of the epic friendship that is Holmes and Watson, I was all about A Study in Charlotte. I went in with incredibly high expectations. I wasn’t disappointed but it wasn’t what I had expected either. For some reason I thought Charlotte and Jamie were both girls (even though the description clearly says “his distance” apparently I ignored that pronoun) so that may have contributed to it not being what I expected. Whoops.

Charlotte is 100% a Holmes, with all the snark, flair for deductions and complete disregard for social niceties. The pressure to live up to her family name and her intense training lead her to fall into what was arguably Sherlock Holmes biggest flaw, addiction. It was a love/hate relationship with Charlotte Holmes. Charlotte was intriguing, with mind blowing intelligence, which is everything a Holmes is supposed to be. She was well written and had incredible depth, however Charlotte often lacked the charm of the original. She did have a few quiet moments where her gentler nature was revealed which was really lovely.

Jamie Watson was not incredibly clever. He was many other wonderful things, honest, loyal, intuitive and very much the yin to Holmes’ yang but he came across as a little dense. Which was one of my only disappointments. I LOVE me some original John Watson. He is clever and while not at Sherlock speed, he is of above average intelligence. I’m hoping Jamie will flourish under the influence of his friendship with Charlotte in the next book and use his intuitive nature to compliment his intelligence. Also his dad was freaking hilarious.

The case of the Sherringford murder was just what any good mystery should be. It was thrilling and I definitely did not call the ending. It kept me turning pages. The case was an excellent catalyst for our current Holmes and Watson to develop the beginning of the friendship we all know and love. Although this one may end in more than an unbreakable bond and platonic love. There is definitely a side of romantic pining. Jamie, I’m looking at you. But what else did you expect with a genderbent Holmes?

Absolutely would recommend to all Sherlock AND mystery fans. I’m excited to see where Cavallaro takes Charlotte Holmes and Jamie Watson next.