Blackhearts left a broken heart and an intense thirst for Queen Anne’s Revenge. 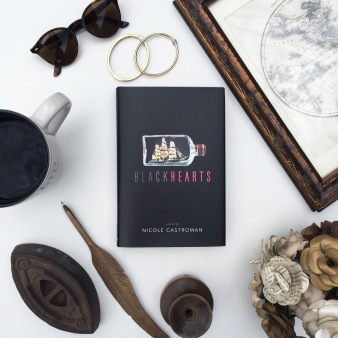 When Edward “Teach” Drummond, son of one of Bristol’s richest merchants, returns home from a year at sea, he finds his life in shambles. Betrothed to a girl he doesn’t love and sick of the high society he was born into, all Teach wants is to return to the vast ocean he calls home. There’s just one problem: he must convince his father to let him leave and never come back.

Following the death of her parents, Anne Barrett is left penniless. Though she’s barely worked a day in her life, Anne takes a job as a maid in the home of Master Drummond. Lonely days stretch into weeks and Anne longs to escape the confines of her now mundane life. How will she ever achieve her dream of sailing to Curaçao—her mother’s birthplace—when she’s trapped in England?

From the moment Teach and Anne meet, they set the world ablaze. Drawn together by a shared desire for freedom, but kept apart by Teach’s father, their love is as passionate as it is forbidden. Faced with an impossible choice, Teach and Anne must decide whether to chase their dreams and leave England forever—or follow their hearts and stay together.

As a history and pirate enthusiast, I was over the moon when I read the synopsis for this novel. I was immediately excited about Anne, seems Blackbeard’s most ruthless pirate ship was called The Queen Anne’s Revenge. Amazing foreshadowing and world building on Castroman’s part. I was not disappointed with the historical side of the novel. In fact, I was thrilled because Blackhearts was filled with subtle historically accurate moments that made my inner history nerd melt with happiness.

Teach was a little bit of an ass…but likable, torn between family duty and individual passion. Anne was strong, witty and unyielding to the prejudice of her historical position, reminding me of Dido Elizabeth Belle, the real life heroine behind the 2013 movie Belle. I was expecting the plot to be a little more adventure driven, taking a dip into Teach’s introduction in piracy. Blackhearts was very much a romance driven novel, plotting the beginning of Teach’s heartbreak, which I think is essential to his eventual transition to piracy. And who doesn’t love a good slow burn romance? The tension, the bickering, the eventual realization and then the undeniable need to be together. So satisfying. Until the ending.

The ending sets up perfectly for a sequel, which Nicole Castroman announced on her Twitter/Facebook on March 18th! A sequel that I absolutely will be reading. The official title will be BLACKSOULS. Currently submitting a petition for the subtitle to be “An Introduction to Pining and Piracy”. I can’t wait to see how the concept of Queen Anne’s Revenge unfolds. GIVE ME QUEEN ANNE’S REVENGE. Please.

If you like emotional pain (the ending) and historical romance then this book is for you. If you are strictly looking for an adventure novel and hate romance, I would say look elsewhere. But then I really think you might miss out on the piratey goodness that I predict is coming in Blacksouls.

Passenger is an exhilarating scavenger hunt through a stunning display of rich historical scenery. It just takes a few hundred pages to get there.

On one devastating night, violin prodigy Etta Spencer loses everything she knows and loves. Thrust into an unfamiliar world by a stranger with a dangerous agenda, Etta is certain of only one thing: she has traveled not just miles, but years from home. And she’s inherited a legacy she knows nothing about from a family whose existence she’s never heard of. Until now.

Nicholas Carter is content with his life at sea, free from the Ironwoods-a powerful family in the Colonies-and the servitude he’s known at their hands. But with the arrival of an unusual passenger on his ship comes the insistent pull of the past that he can’t escape and the family that won’t let him go so easily. Now the Ironwoods are searching for a stolen object of untold value, one they believe only Etta, his passenger, can find. In order to protect her, Nick must ensure she brings it back to them-whether she wants to or not.

Together, Etta and Nicholas embark on a perilous journey across centuries and continents, piecing together clues left behind by the traveler who will do anything to keep the object out of the Ironwoods’ grasp. But as they get closer to the truth of their search, and the deadly game the Ironwoods are playing, treacherous forces threaten to separate Etta not only from Nicholas but from her path home forever.

i. A brief section of music composed by a series of notes and flourishes.
ii. A journey by water; a voyage.
iii. The transition from one place to another, across space and time.

Let’s be real. We all judge books by their cover. At least a little bit. My first inclination is to pick up the books with visually striking covers.

And Passenger has one of the most stunning covers of the year.

Once I stopped drooling over the cover, it actually took me a couple of weeks to really get into the story.  I found the beginning to be a little slow and 50 pages in, I put it down and didn’t pick it up again for another couple of weeks. It took me almost another 100 pages to really get invested but once it grabbed me, I was swept up into a breathtaking, historically rich, adventure.

Etta is a badass and once she started to show her character I was instantly enthralled by her. She is complex, reflective and strong with some girl boss flair. Nicholas, as a character has amazing depth and is very in tune with the world around him. As a couple…not my favourite but individually, so lovely and engaging. The historical snapshots were so vivid, it was hard not to fall into the story, like Alice into Wonderland, despite not being super into the love story. The time travel could have gone into timey-wimey nonsense territory but Alexandra Bracken had a creative, clear cut concept that kept out major plot holes (unlike Steven “plot holes are life” Moffat).

Overall, beautifully written and seriously elegant. And in true Bracken flair, the cliffhanger left me waiting for book two to find out how this is all tied together.

I’d recommend Passenger to the book lovers who want an entirely drug free yet lucid trip to another time. Just make it through the first 100 pages. I promise it will be worth it.
Until next time,

I just wanted to thank @MCSnugz (aka Sarah Knight, author of The Life-changing Magic Of Not Giving a F*ck) for this post on Book Riot about the power of pleasure reading.

I was an intern at a major publisher and it was absolutely amazing, a book lovers dream, which I miss dearly and would do again in a heartbeat. BUT I had the same reading problem. I had stacks of ARCs to read and prepare work for and they were all books I would be happy to pick up in store anyway so I should have been thrilled, but there is a difference between reading because it has to get done and reading for pleasure. I almost resented my book stacks by the end of the internship (just an internship, although a full career hasn’t been counted out yet) because I missed reading when and where I wanted to. These feelings were completely unexpected. I thought I would have my Book Lovers badge taken away because I was so lucky to be in the position I was, surrounded by amazing books and future best sellers, and not loving every minute. So thank you Sarah Knight for making me feel like I can still proudly wear my Book Lovers badge.

Starting Regularly Reads was a way to share books with the community I love (here’s looking at you fellow book lovers) at my own pace and schedule. I may return to the publishing world someday in the near future and this time I won’t underestimate the power of pleasure reading.

It’s all about balance.

Because as Sarah said “…life is too short to finish books you don’t like”.

P.S. I did love my internship (just not every minute) and would recommend a career in publishing to anyone considering it. When your only problem is you have TOO many books to read…well life isn’t that bad. Just remember balance.

With the pure sass of the original novel, Pride and Prejudice and Zombies adds an extra layer of badassery to a classic. 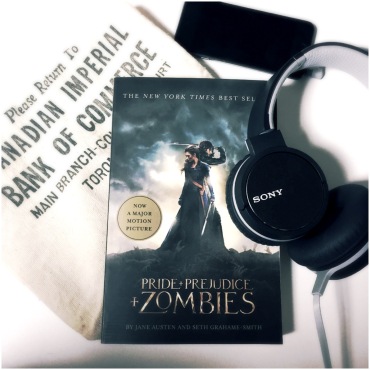 “It is a truth universally acknowledged that a zombie in possession of brains must be in want of more brains.” So begins Pride and Prejudice and Zombies, a bold reimagining of Jane Austen’s classic novel. As our story opens, a mysterious plague has fallen upon the quiet English village of Meryton—and the dead are returning to life. Feisty heroine Elizabeth Bennet is determined to wipe out the zombie menace, but she’s soon distracted by the haughty and arrogant Mr. Darcy. What ensues is a delightful comedy of manners with plenty of civilized sparring between the two young lovers—and even more violent sparring on the bloodsoaked battlefield. Complete with romance, heartbreak, swordfights, cannibalism, and thousands of rotting corpses, Pride and Prejudice and Zombies is an audacious retelling of English literature’s most enduring novel.

I was SO unsure about this concept that it took me almost 7 years and a movie trailer to give it a try. As a lover of anything zombie or apocalyptic, I should have been all over this book back in 2009 but my love for Austen made me hesitant. After seeing the movie trailer, I was instantly drawn in and went straight to Chapters to get a copy.

The dialogue stays very true to the original novel. It’s the in between moments, the moments of action, that bring on the badass. It was ALMOST exactly like reading Austen but instead of dancing, sometimes there is duelling. Occasionally at the same time. Our main characters maintain their well known hostile flirting with a side of sass while delightfully dealing with the unpleasantries of killing zombies in a most civilized manner. Muskets and Katanas are considered unladylike but one must always be armed with at least an ankle dagger, while not as effective, it is a subtle and delicate weapon. While taking a turn around the garden, one must always be on alert for shuffling and moaning.

It was a quirky and cheeky read. However, if you aren’t a fan of Austen prose and Regency era dialogue and manners this book may not be for you. But if the concept of Austenland combined with The Walking Dead appeals to you then get reading!